Mage with a “Frost” specialization is a master of magic who’s mastered the water element in its most destructive form. Almost all the spells slow down enemies, which enables the mage to win time in battle. This guide will teach you all the basics and peculiarities of this specialization. It’ll show you which builds to use, which covenant to choose, how to equip properly, and many other things. Having mastered all the sections, you’ll quickly realize how much better your in-game results have become.Pros:

Basic information on the spec

Like all mages, “Frost” uses mana as a main resource. There are no real problems when it comes to this specialization. The only thing that can leave a mage out of mana is the constant use of Spellsteal and Arcane Explosion.

The idea of playing a mage with a “Frost” specialization is about getting and using “Procs” right (Fingers of Frost and Brain Freeze). Frostbolt is the main proc generator. All the abilities of a frost mage have an increased critical hit chance when attacking frozen targets thanks to the passive ability Shatter. It’s at the core of the spec. Read about it in detail in this guide.

* Lonely Winter grants the largest damage boost for your main spells and should be chosen by default. Ice Nova is primarily used in PvP.

*By default — Shimmer allows you to change your character’s position without breaking spellcast and losing DPS. The other two talents are niche and used rarely.

*Rune of Power is the default choice, but Focus Magic has its uses, too. If two mages combine buffs, both get a DPS boost without losing momentum. You can compare these two talents on raidbots.com, since they are very similar.

*This build is designed to increase the damage of Ice Lance, so Chain Reaction is the only choice in this tier. Plus, it’s now easier to maintain stacks due to Brain Freeze applying 2 stacks of Winter’s Chill.

*This tier has no damage bonuses. Take Frigid Wind if you want to boost your slowing effects, Ice Ward — if you can utilize the second Frost Nova (Note — the target standing in the Frost Nova is considered frozen, so we can shatter ticks of Frozen Orb, Blizzard, and other abilities). Ring of Frost is primarily used in PvP for cross-control or against targets immune to polymorph, or if you need to group up multiple targets.

*Splitting Ice. Best choice in this tier. Another talent that boosts Ice Lance damage and allows it to cleave. Freezing Rain — best talent for AoE with multiple targets.

*Thermal Void — default choice, along with potency conduit Icy Propulsion (more on that next), Icy Veins’ uptime becomes high even on a single target, 3 targets or more – 100%. Ray of Frost is used in PvP and Glacial Spike has lower damage.

Frost mage’s build is universal for Raids and Mythic+

Each covenant grants its followers a signature and a class ability.There are 4 covenants total: Venthyr, Kyrian, Night Fae, and Necrolord.You can change them once a week. Note that the covenant’s power depends not only on signature abilities, but also on available soulbinds.Single-target: Venthyr > Kyrian >= Night Fae > Necrolord

Signature — Door of Shadows. Slow long-range teleport. Not a big gamechanger for a mage, but has its uses, making this class even more mobile.

upd. The simulations have shown that it slightly boosts DPS only when using a Freezing Winds (more on that coming up).

Signature — Summon Steward — Call a steward to bring you a potion that restores health and removes most debuffs and bleed effects. Very useful.

Class — Radiant Spark — enhances 4 of your next spells. Pretty powerful, but sometimes getting the maximum effect can be tricky, i.e. boosting only Ice Lance —

Signature — Fleshcraft — without soulbind bonuses it’s just a strong shield. With them — quite useful, since it gets stronger when cast near a corpse.

Class — Deathborne — IMO, it’s weak, mainly due to its long cooldown that doesn’t line up with Icy Veins.

Signature — Soulshape — a very pleasant ability. It can get you out of a hairy situation if you have no blinks left, and running around rest areas with infinite sprint is a joy.

Class — Shifting Power — very strong in M+ and any AoE encounter. Reduces CD of all abilities except itself and Soulshape. Against a single target its usefulness depends on the duration of the fight. In case you were unable to dish out more Frozen Orbs, runes, or receive a bonus from Icy Veins, you’ve basically wasted its use.

Icy Propulsion — the most effective conduit for single-target and AoE, starting with 3+ targets the uptime of Icy Veins is 100%.

Ice Bite — even after nerfs in beta it still holds the second place in terms of damage to a single target.

Shivering Core — doesn’t boost DPS on a single target, could be used in ultra-AoE situations since it has no target cap.

Cryo-Freeze — heals you while inside Ice Block. Even though at higher ranks it heals almost completely, we’re not going to chill inside the Ice Block for the whole duration, which makes this conduit less useful.

Diverted Energy — healers usually try keeping everyone at full hp, so heals from this conduit will be wasted more often than not. However, it can be useful if AoE damage is overwhelming and the healer has their hands full.

Flow of Time —  more blinks — more DPS. At maximum level it has the same cooldown as Shimmer before the nerf.

Grounding Surge — situational, if you wish to reduce the cooldown of counterspell. Even at max level it doesn’t reduce CD to 15 sec, so its usefulness is up for debate.

Incantation of Swiftness — nice to have in M+ or the arena, but not really worth the slot.

Winter’s Protection — at max rank reduces CD by a minute. Could be viable in some fights, where you need a 3-minute Ice Block.

Here’s a comparison chart of conduits for all covenants: 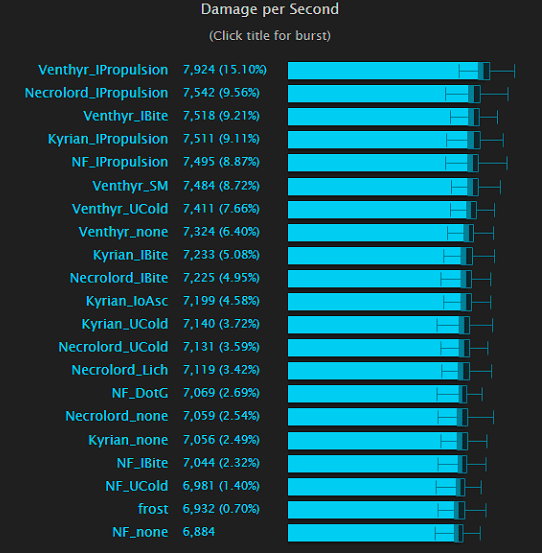 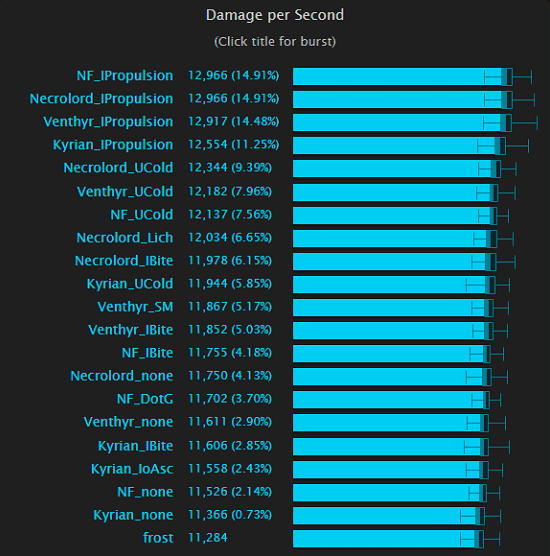 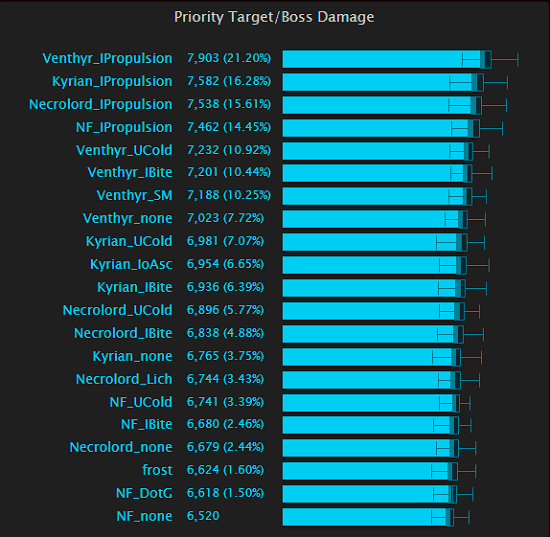 Each covenant has 3 soulbinds to choose from with unique abilities and effects. Often you have to choose between the soulbind ability that deals damage and a conduit.The image below shows a comparison chart for soulbinds with the maximum level of Renown (The use of 2 DPS conduits is implied if the chart doesn’t specify the Soulbind’s DPS ability).

Note that the choice of legendaries can be affected by your chosen covenant, talents, and your overall equipment.

If there is a larger (5+) number of additional targets, casting Blizzard and Frozen Orb becomes a priority over the use of procs. But don’t forget about your priority target and don’t waste your procs. Also, when there’s a lot of enemies, no priority target and Blizzard is on cooldown, use Arcane Explosion as a filler instead of Frostbolt.

Choosing a race is not critical for a Frost Mage. You can use whatever looks best to you. But if damage bonus is a crucial factor to you, use these charts for the Alliance and the Horde: 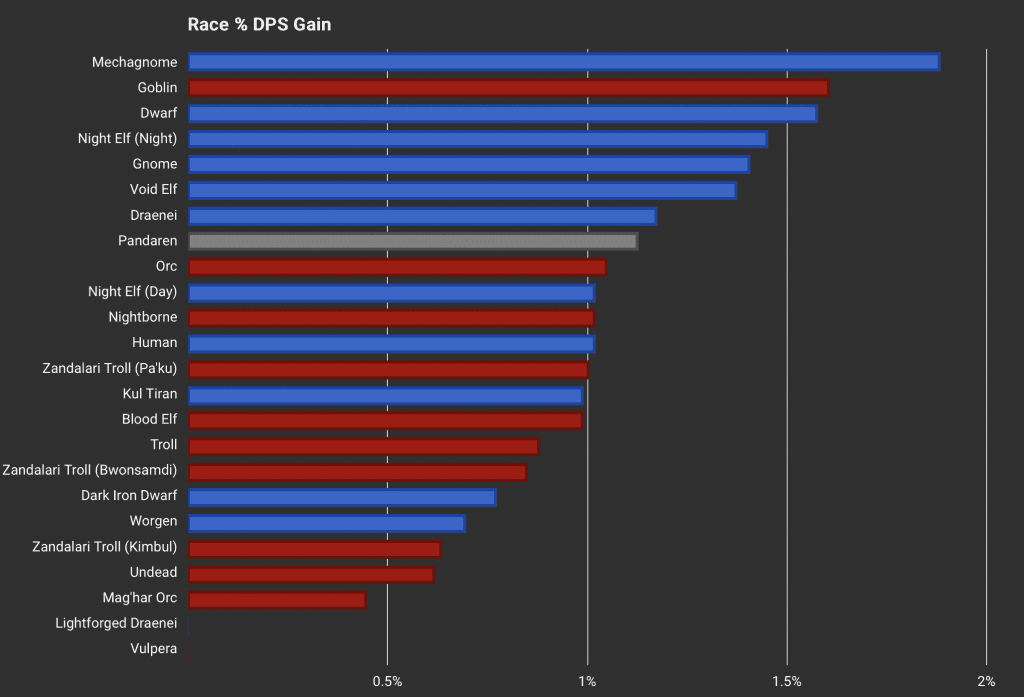 The following stat priority can be taken as a basis:Crit to 33.34% > Haste = Versatility > MasteryYou should always use raidbots.com to determine priorities for your character.Based on the priorities above and simulations of your character you can choose gems, enchants, and consumables.

Rings: Enchant Ring – Tenet of Versatility or any other stat depending on weight. 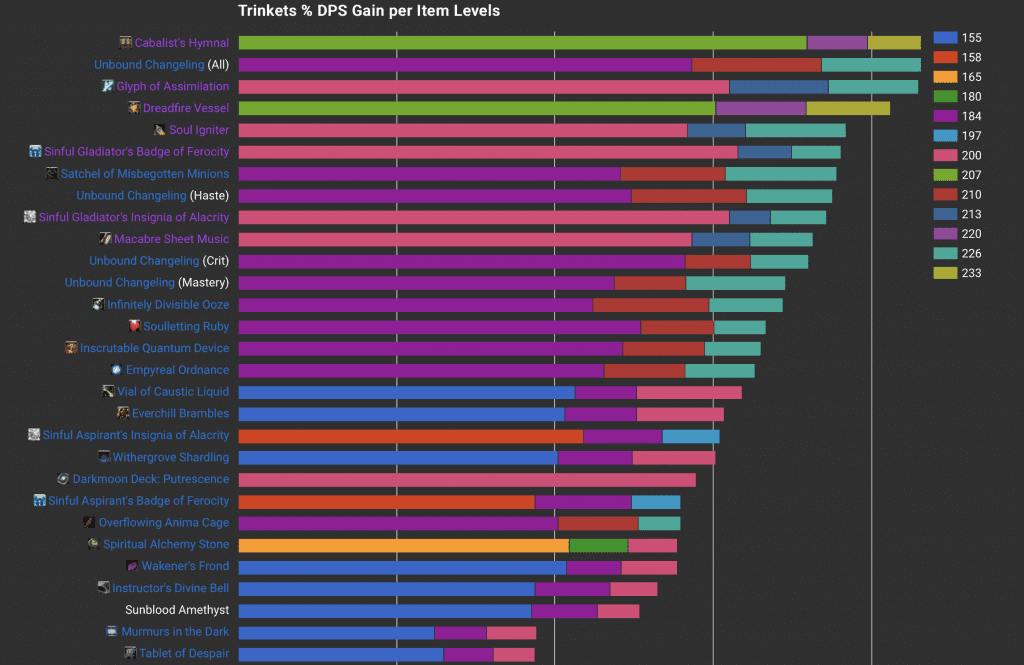 Macros are utilized to do something faster and more efficiently. Their use is optional.Blizzard at the cursor position#showtooltip/cast Blizzard

Focus on the target under the cursor

When there’s a lot of enemies and you need to multitask (attack one enemy, interrupt another, and purge that third guy over there) and clicking nameplates is unreliable, use this macro:

Cancel Alter Time (if you don’t want to return to the void zone).

I also have a lot of abilities in /cancelaura Ice Block macros. Example:

Burst + use of trinket and racial ability:

Addons are personal preference as well. I myself am not a fan of interfaces that look like a spaceship console. Main rule — don’t clutter your screen with useless information.I recommend these ones:BigWigs/Deadly Boss Mods — addons with timers and announcements for important events.Details! Damage Meter — of course, most people use it to evaluate their button mashing skills, but this mod’s features go beyond simple DPS counting.

Exorsus Raid Tools — pretty good addon that was recently revamped, now it has an updated UI and unique features.

WeakAuras — probably the most important addon for modern WoW. With its help, you can set up almost anything, and on wago.io you can find hundreds of useful auras and import them to your game in a few clicks.

Plater Nameplates — its design and nameplate customization tools leave much to be desired.

BigDebuffs — allows you to filter out debuffs on unit frames.

Advanced Interface Options — allows you to fine tune the config.